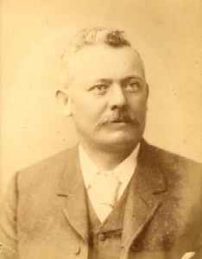 John Taverner, a Mallee man to the core, was born on 20 November 1853 at Williamstown, Melbourne the son of Irish-born parents Henry Taverner, a police sergeant and Margaret née Large; he was educated at the local Scots Grammar School before the family moved to Kerang to take up land in 1864. By 1890, Taverner was well known and popular throughout the region as a successful stock and station agent (“Yeo, Taverner & Co”), twice president of the Swan Hill Shire council (1881-83), chairman of the local Water Trust, vice-president of the North Western Municipal Association of Victoria, and twice president of the local branch of the Australian Natives’ Association.

His popularity saw his election in April 1889 as member of Donald and Swan Hill (1889-1904) in the Legislative Assembly and it wasn’t long before he championed the Mallee farmer; a protectionist, Taverner favoured party government who foresaw coming generations of Country Party politicians. He went on to serve as commissioner of Public Works, vice-president of the Board of Land and Works and Minister for Agriculture (1894-99) in Sir George Turner’s (St. Kilda Cemetery) first ministry; Turner was widely ridiculed as “the best of a bad lot” of candidates to replace Sir James Paterson (Melbourne General Cemetery) but in fairness succeeded in restoring fiscal responsibility to the state finances after the land boom went bust.

Overlooked in Turner’s second ministry (1900-01) before Turner entered Federal politics, Taverner bided his time and with other ‘Country’ factions defeated the (Sir Alexander) Peacock (Creswick Cemetery) government in favour of (Sir) William ‘Iceberg’ Irvine (1858-1943) in June 1902 who had the temerity of not consulting David Syme, editor of The Age newspaper for Syme’s approval of the ministry; Taverner was rewarded with posts of commissioner for Public Works (1902-03), vice-president (1902-03) and president (1903-04) of the Board of Land and Works, commissioner for Crown Lands and Survey, and Minister for Agriculture (1902-04).

Described as “thickset and genial, with a walrus moustache”, Taverner was ambitious and on Irvine’s resignation in February 1904 favoured his chances to succeed him as premier only to be defeated by Thomas Bent (q.v.). As the only credible alternative to Bent as premier, Taverner was ‘promoted’ to the post of Victorian agent-general in London (1904-13) in Bent’s first public act as premier; soon after his departure allegations were levelled against him while Minister for Agriculture. A subsequent royal commission dismissed most of the charges but found that he had exerted improper influence to gain preferment. Returning to Victoria in 1922, Taverner became chairman of the Primary Producers’ Bank and while opening a new branch at Doncaster collapsed on 17 December 1923.

He resided at Grange Hurst – Hillcrest Avenue, North Brighton and was survived by his wife Elizabeth née Luxton (1852-1936) whom he married on 23 May 1879.